Back to COP BI
MC TRESH 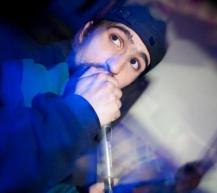 Tresh, is a Drum & Bass MC since 2002. He has performed alongside the best portuguese DJs, such as: Alif, Nokin, Nsekt, Nuno Forte, Real Phase, Skalator, Sleepz, Subway, Uzi and Trap, and playin, from North to South, in some of major nightclubs and events.

Until now, he had the privelage to perform alongside internacional established artists, such as: Anile, Calyx, Darren Jay, Fabio, Original Sin, No Money, Serum, Temper D, The Qemists, The Square, Trei, Vicious Circle and Zen.

In the year of 2008, he was invited to become member of the first DNB portuguese label, Speaker Blower Records, and started his first studio work in the Drum & Bass with Dr. Speaker Blower and The Kronik People feat Sour Singer, and in the Breakbeat area with Freimatic.

In 2010, he had his first internacional experiences in United Kingdom (Eastbourne) and Germany (Frankfurt and Wisbaden), where he performed live and participated in radio shows in each country.

In 2011, he collaborated on the production of the "Just a Dream" EP by Lpx, signed by the greek label V.I.M. Records, and vocalized three Dubstep tunes.