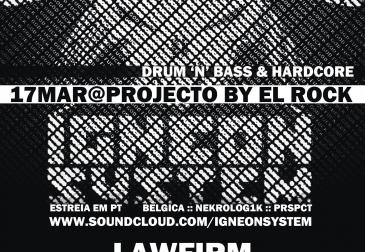 Igneon System born and raised in Belgium, started his love for music in the 90's.
In 2002 he started to dj drum'n'bass and Hardcore with friends from his hometown and at some local party's.

But after a while he got interested in the power of production.
Buying himself a little studio , he started to explore the production process. In that period he discovred his sound, a combination of UK Hardcore with Hiphop, D'n'b influences.

It didn't took long before people started to notice his sound.
He got his first record signed on Elektrokut in 2008 followed with "Fearcrawler" on Pandemonium. This track also apparead on Dj Producer's Operation Obliterate mix Cd on Audiogenic.
Also he released tracks in 2009 on labels such as Rebelscum, Audiodamage, Nekrolog1k , Cheeze Graterz, Pandemonium, Scare Tactics, Motormouth and Neurotic Waste.
As for in the future you can expect more eardamage for labels such as Third Movement, Prspct,Industrial Strength, Nekrolog1k,Motormouth, Agnost1k and more.

Also Igneon System plays with Homeboy in one live act called "Nekrolog1k" and will perform a live act together with Dolphin.

Igneon System is also the promoter of MuSick. A organisation that brings the best Hardcore/Breakcore/Dubstep and Drum'n'bass from Belgium and abroad. These gigs are situated whole over Belgium. MuSick their formula (big line-ups for a decent price) worked out well and every night was completly packed.
(more info http://www.musickevents.be/)